One of my three dogs has been missing for over a day now. He's a fat lazy dog that's rarely ever gone for longer than 30 minutes. Disappeared about 15 minutes before his suppertime yesterday afternoon. His favorite thing is dinner so it doesn't look good. I'm just completely torn up over this. Spent half the day walking the fields and woods around my place. Been driving all over to make sure he wasn't hit by a car and in the road or ditch. He was like a child to me. Took him in 6 years ago after he had been abandoned (along with his two "brothers") by someone down the road from me. Well I started taking care of the three of them at that time but hadn't made the full commitment to take them all in. As it turned out the three of them along with a neighbors beagle were in a cow pasture of another neighbor who in turn shot and killed all of them (not the first time this guy has killed neighborhood dogs) except my boy "Patch". He somehow made it to my home with 2 broken legs full of buckshot. It was a Saturday so I loaded him into my car and took him to an Emergency Vet. They did a great job fixing his legs and after about 8 weeks the casts cam off and he was almost as good as new. 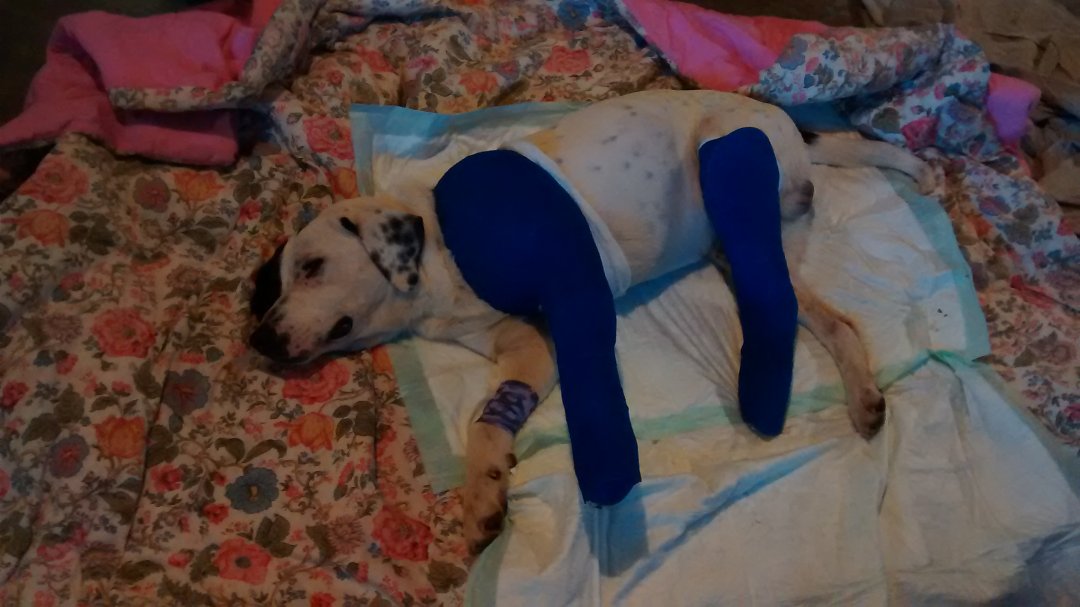 It cost a lot and I'm not wealthy by any stretch of the imagination but that was incidental to me as I instantly bonded with him. Just a sweet gentle big dog. My little niece (3 yrs at the time) would get on his back and ride around him in the house like he was a horse. He loved it Wish I could find the pic of her riding him like a horse.
He was just so gentle and loved being loved. 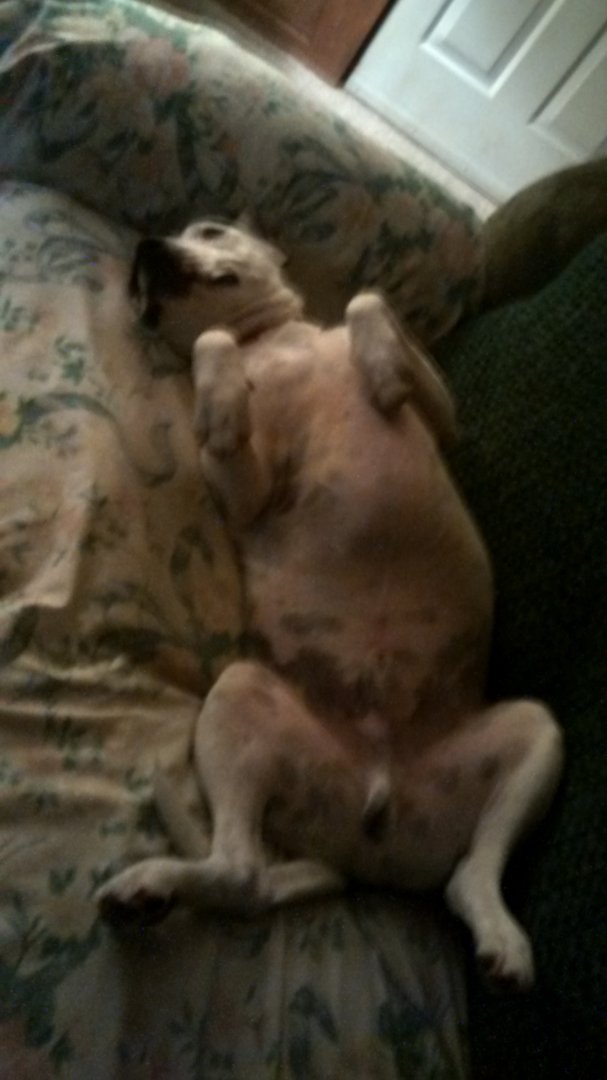 I'm just devasted cause I know that something happened to him and he's not coming home. I was outside raking leaves at the time and he was sitting in the yard chewing a bone. When I looked around again over where he was he was gone. Not unusual as there is a lot of wildlife here and the dogs go ripping after things but always come back after a few minutes. Especially at dinnertime. My other two came back and he didn't. We live on a dead end road so I can't see anyone grabbing him up especially right there in front of my home with me out there. I'm just at a loss. Almost would be easier if he was hit by a car and died. At least I would know.

I know this is off topic.....sorry for that. Can't sleep, can't concentrate on work. Just a mess. Probably won't be posting here much for a while as losing him has just sucked it all out of me. Can't concentrate on anything, feel guilty that I'm not out there looking for him but I have no idea what else I can do. I spent nearly the entire day walking the fields and woods and driving around a large perimeter where I thought he could be if he had gotten lost. Nothing. Told my friends and neighbors, offered a reward to a couple of the sketchy ones if they could find him and brought him back to me. Told the local Cop that I know. Just at a loss as to where he went and what else I can do. Really hard as it took me a long time getting over losing my pitbull to kidney failure. Having Patch helped that a lot. Now he's gone. Just really hard.

With this happening along with the election and covid....not much to be happy about.
Last edited: Nov 21, 2020

Staff member
This brought tears to my eyes.
My neighbor's dogs took off about three weeks ago.
The next day both of us hit the woods and roads.
When my grandson stays Monday and Tuesday, I keep a bag of treats and Nolan, and I walk through the woods both evenings to give the treats. He loves these dogs.
Two days later, the little one showed up by himself.
A day later, the big one showed in perfect condition.

Nolans treats that Monday was a package of ballpark franks.

Chris I know we talked about My Goldens before So you are in my thoughts. Keep checking with all the local shelters and SPCA as some one may have picked him up and turned in. Also facebook get the word out.

oh man, sorry to hear this. that sux totally. the not knowing is the worst

social media is very powerful sir. When my 2 chocolate labs ate thru my picket fence they were gone for about 36 hours. Took off work. Walked miles in the woods. Drove around aimlessly. I had given up. But my daughter posted something on snap chat at school and someone who doesn't even go to her school sent her a link to a Facebook group that had a pipe and valve yard about a mile from house. They posted that there was 2 dogs running around their equipment yard. Jumped in truck and went and got them. Don't lose hope yet.
J

I hope he comes back, I lost one of my German Shepherds in August and we still miss him so bad!

Wishing you the best Chris, hopefully he will show back up.
O

Praying for a safe return.

Chris, I had a similar thing happen with a border collie we had rescued. She was an escape artist and whenever thunderstorms were in the area she would run away.

I had posters made up with her picture and plastered them everywhere. That seem to work really well until one day she disappeared for almost a week.

Like you I walked for miles, calling her name and looking for her. Nothing!

Then I found out what happened to her - my new "liberal" neighbors had taken her in to their home. It was Grandma, the women's mother, that kept nagging at her daughter saying, "you know that dog belongs to the people next door" until she finally called me to confess that she had my dog.

They had supposedly run up a $270 vet bill getting the dog examined and vaccinated so they wanted to be reimbursed for that. This made me very upset but rather than accuse them of theft, I paid the bill and took my dog home.

I have never trusted those neighbors after that.
S

hoping for the best I know they are like family

Chris, There is nothing I can add to the kind remarks made above by the other guys. I just wanted you to hear from me and know that I care. I will have you all in my prayers.

I kept hoping as I was scrolling down in the replies that I'd see he came back. You're definitely in our thoughts and prayers, don't lose hope!
O

Hope you find him safe and sound. Dogs are the best thing to ever happen to humanity. They are our best friends and better to us that most humans. I've always had a few around and always will. Kills me every time I Iose one. My thoughts and hopes are with you.

Chris, sorry to hear about your dog. Hoping he shows up.
D

Late this evening around sunset I went walking around my place and the surrounding woods and fields. More just trying to figure out what happened than anything else. Got back on my road and started looking to see if his collar was in the ditches on the side of the road. For whatever reason (God) I went back a little bit and stopped for a second. As I was getting ready to walk back to the house I heard a muffled whimper. I said Patch? and heard the whimper again. This was at the edge of a field on my property with no trees just a old tobacco barn. Trying to figure out where the noise was coming from I looked down and there he was stuck in a drain pipe, the kind you put down when you make a entrance way to a road from a field driveway etc over a ditch. He was stuck in the drain pipe. His head was just barely sticking out the end. I ran to the house (left my cell there) and called a friend with the Vol Fire Department. They broadcast it over the radio (police and fire) and soon two of my neighbors showed up along with the local cop. We were able to dig out in front of the pipe (he went in one end and made it right to the other end before getting stuck. About 15 feet). After a few minutes of digging and repositioning his paws some, he was able to crawl out under his own power and proceeded to jump into the cab of my truck. 48 hours he was stuck there and in perfect condition except for a little bit dirty and thirsty.
I just have to say that I give God the Glory for this. He answers prayers. God directed me to him, I have no doubt about that whatsoever. I was moping around and I felt the need to go out and walk around one more time. I never would have thought to look for him there. In my mind it is truly a miracle. Some of you may poo-poo that, that's ok. I am not someone who says something like that lightly or often, but I truly believe he answered my prayers.
Thank you all for the kind words and well wishes. And all of you who were optimistic.....you were right. Like a thousand pound weight has been lifted off me.

That is the post I wanted to read.
E