More progress in the shop, another upholstered piece getting assembled... this one the driver's side rear kick panel. Our polished stainless seat belt escutcheons are installed, one in the front for the lap belt and up top for the shoulder belt. 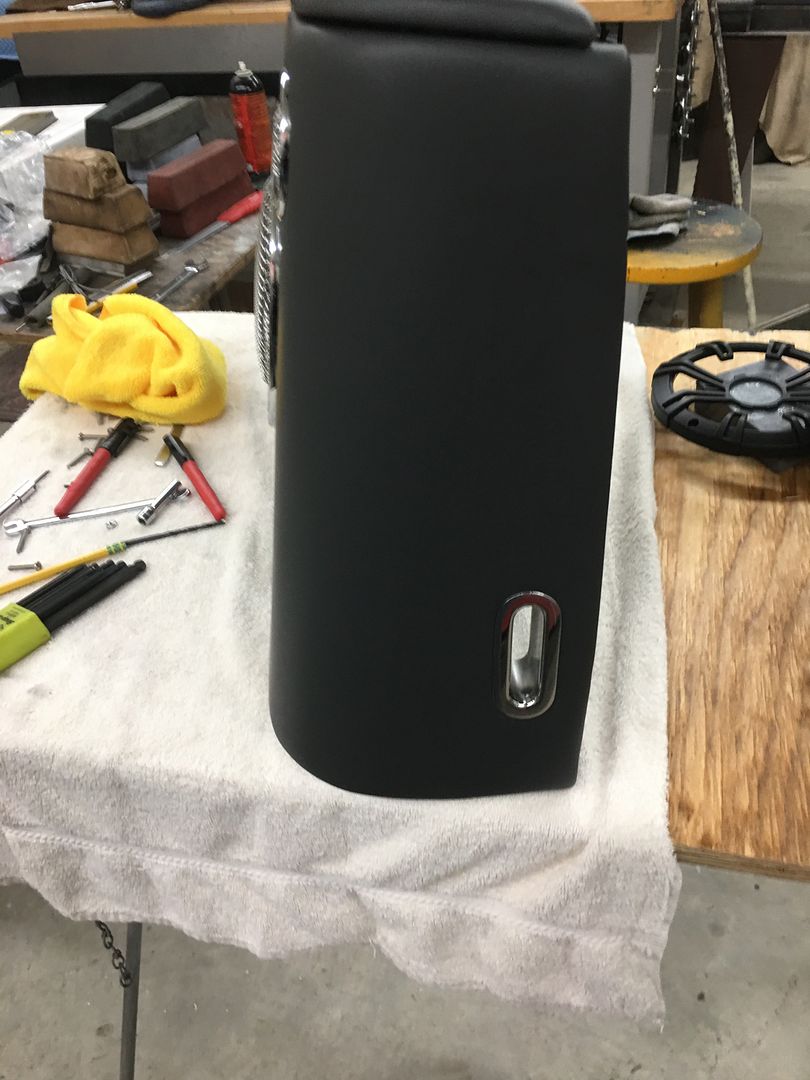 Vince has the hood just about ready for epoxy...

And we got a new "radius" fixture for the Tommasini wheeling machine, allows you to use it to form radius on flat bar and other shapes..

Overdue for another update...

We had some dings in the F7 hood to remove that were located in the radius along the sides.. Didn't really have a hammer that fit the exact requirement, so I use a "KIT" that my buddy Will Cronkrite had given me, a piece cut out of a Model A leaf spring.

I had more than one BF603 in stock, and rarely use the pick end, so it became the likely candidate.

Some crown added long ways and polished up...

Both of the Wagon's rear kick panels are now prepped, ready to go..

Vince has the core support and associated parts blocked and ready for some green...

….and speaking of paint, we got some "new" used light fixtures for the paint booth so we can see a bit better...

Now that we can see a bit better, it's clear that the walls need a fresh coat of white...

….And some blocking tips on the F7 hood. We have a nice crease on the inside of the hood from front to back. These scratches show that we would be taking material off the adjacent side if no other steps were taken to stop our sanding block at the center of the crease...

By adding a strip of tape along the center, it gives us a positive stop for the sanding block..

Then switching for the other side....

Which leaves us a nice crease in the middle, and panels nice and flat to either side...

Some equipment changes in the shop.. The Baileigh MH19 was sold last week and Saturday morning was picked up for its journey to Pittsburgh...

After the Baileigh left, we had another louver job with Cody, this time on a C10 Chevy hood. With the Lennox sitting in the corner like this...

….. there has been a couple of occasions that large panels would run into interference with the shear. Saturday would be no exception. We had to cut the anchors with a Sawzall and slide it toward the paint booth to make room for the hood...

Since the Baileigh was picked up early that morning, the spot it used to be in seemed a better location to eliminate future issues with obstructions to the side.. So we used the 6000 lb capacity engine hoist to move the approx. 4000 lbs of Lennox..

Which left this spot open for the new Powell Hammer, the replacement for the Baileigh. The dies are located higher on the new machine, so any larger panels should clear over top... 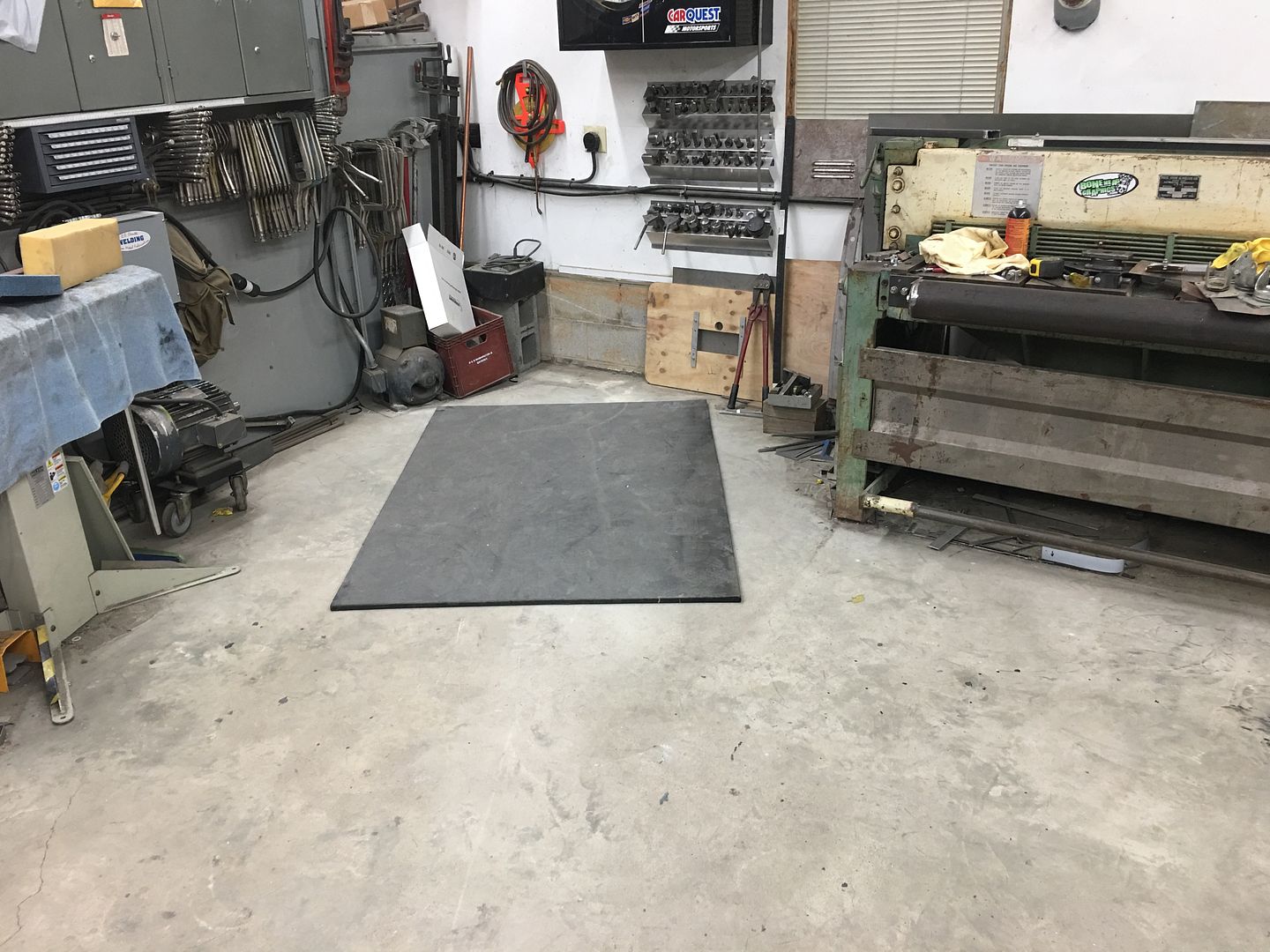 Monday was moving day for the Powell hammer, Mario helped with the loading, unloading, and positioning exactly where it was supposed to go...

All that's left to do is drill some holes into the concrete and add some "peg" bolts to keep things from moving around.

That Powell looks like quite a step up from the Baileigh but I'm just going by appearance.
You may need to build a bigger shop in the near future!

Been on hiatus in SC for the day job so I did need to catch up here.. I did need to pick up the normal shop supplies, but it appears PepsiCo is skeered that some Hillbillies will be offended by the caricature on the side of the can.. So the new can that rolled out is sans any hill folk figures, now replaced with the "Real Sugar" moniker..

I did check one of the stores and noticed they were obviously prepared for my arrival...

So we're good for a few weeks now. I must apologize to the good folks in SC that have the same need for sugar, I have heard there is no Throwback/"Real Sugar" Mountain Dew left in the entire state.

Some of the other "goodies" brought back from SC, this is a brand new in the box Desoutter die grinder that I picked up from a pawn shop. Sales must be slow, as I stood firm on my low ball offer and they accepted. Paid less than 1/3 of retail..

Also brought back another wagon to work on..

Cousin JB is building this for his nephew, and I'll be spraying it with a Kandy finish using some of the leftover paint in the paint locker..

We had the storm blow through recently, luckily we did not have the damaging winds that was seen in Delaware and Eastern Shore.. We did get plenty of rain though. My precision rain gauge indicated we had 6-1/4" of rain in less than 24 hours time. Here's the end of our road at 9:30 the morning of the storm. The stop sign in the distance is about 5' off the ground.

My daughter was due to work that day, and her manager did not understand the concept of flooding. She suggested E wait until the rain stopped and the water would quickly subside. This was later at 11:30, when she normally would have left for work. Note the level has risen to now touch the stop sign. E did send pictures along with "see you in a couple days"

Other than a few limbs to pick up, we didn't really have any damage. Blessed to live at the top of the hill... The road was closed for about 2-1/2 days, and we had a few bridges a bit farther north in the county that washed out, so we have a few detour signs scattered about.

Neighbors garage near the end of the road..

Cody sent a picture of the truck we had louvered the hood for, fits the motif pretty well..

We've been doing some spring cleaning in the shop to get ready for the wagon's return from the paint shop, and some reorganizing which includes storage ideas..

Moved the tooling racks for the Lennox to the new position, and the false wire edge dies had a new rack made of 3x3 angle to clear off the spot they were taking up on the workbench.

The new Powell power hammer came with a grunch of anvils in a basket and needed a rack built for this as well. Another 3x3 angle is drilled with 1" rotary cutter, then the worn out blade on the band saw did a good job of making slots..

In order to keep these pricey chunks of S7 from bouncing across the concrete, a restraint system is in order. Delrin "hooks" were made for a fiberglass "crossbar" 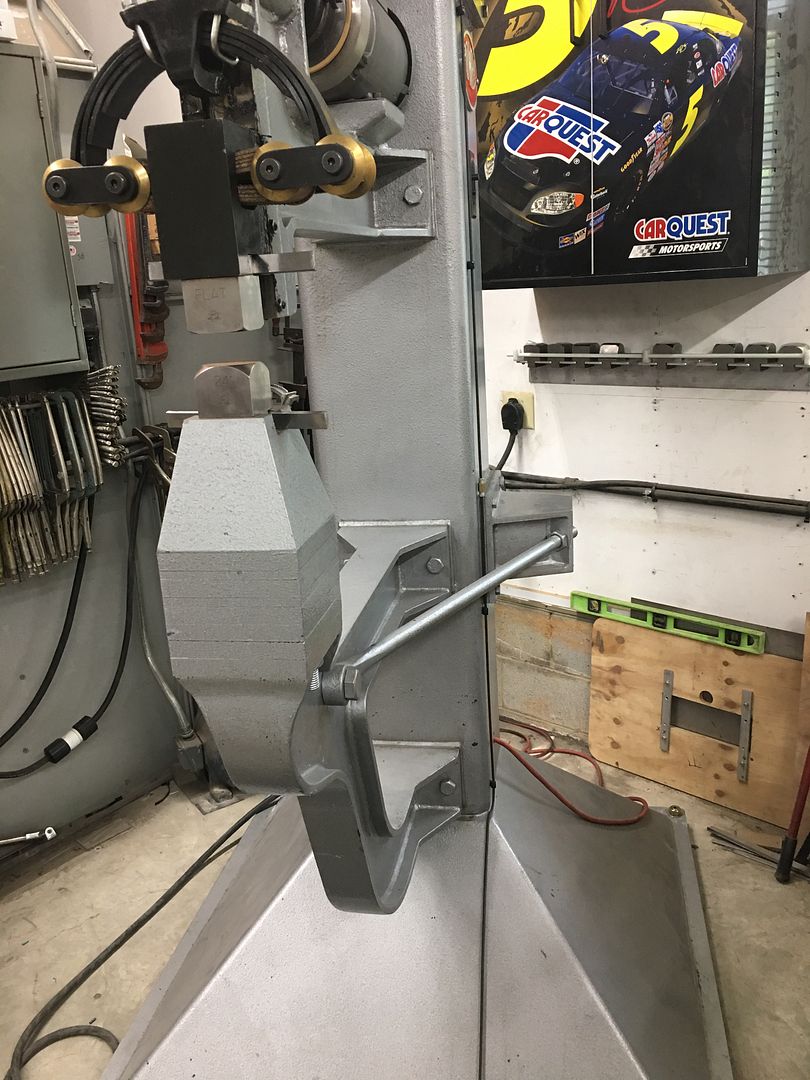 All these parts other than hardware used was 100% recycled from the scrap pile.. More cleanup, woohoo!

Spring cleaning extended to the top of the tool box and welding table...

Oh yeah, wagon got some paint today! Richard and Brandon Glymph of Absolute Rod and Custom Paint in Annapolis got some of the Organic green Kandy basecoat and clear sprayed. 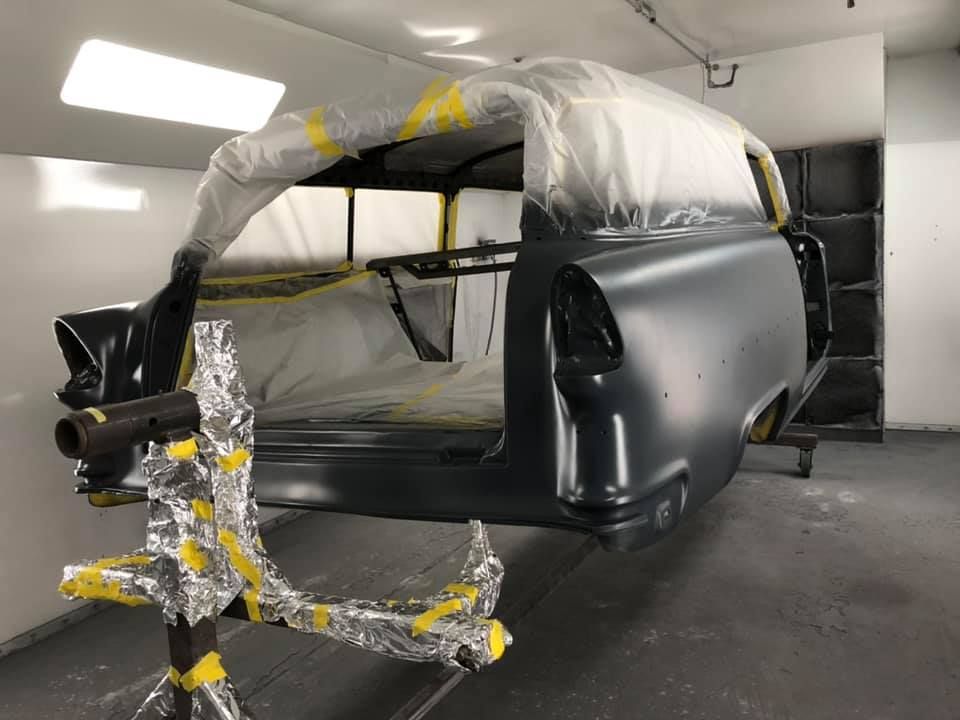 Video shows some of the pop you'll see in the sunlight..

Still waiting on some sunlight, but a shot rolled outside...

OK, sun came out for a few minutes today so Brandon sent a couple more videos...

I was looking at the date this thread started and it's been six years. The amount of custom work and the attention to detail going into the car is absolutely incredible. Can't wait to see the finished project!

Well yesterday was homecoming, Jared and I drove up to Annapolis to pick up the body from Absolute Rod and Custom Paint. Really pleased with this green paint, it does catch your eye.

Gotta love a tilt bed trailer for loading a rotisserie...

All strapped down for the trip south...

A stop for fuel and then we headed to the Wednesday night meet at Leonardtown Arby's... I think that's the slowest traffic has ever travelled south out of Annapolis, we had quite a few people breaking their necks, slowing down to give the thumbs ups, etc.. 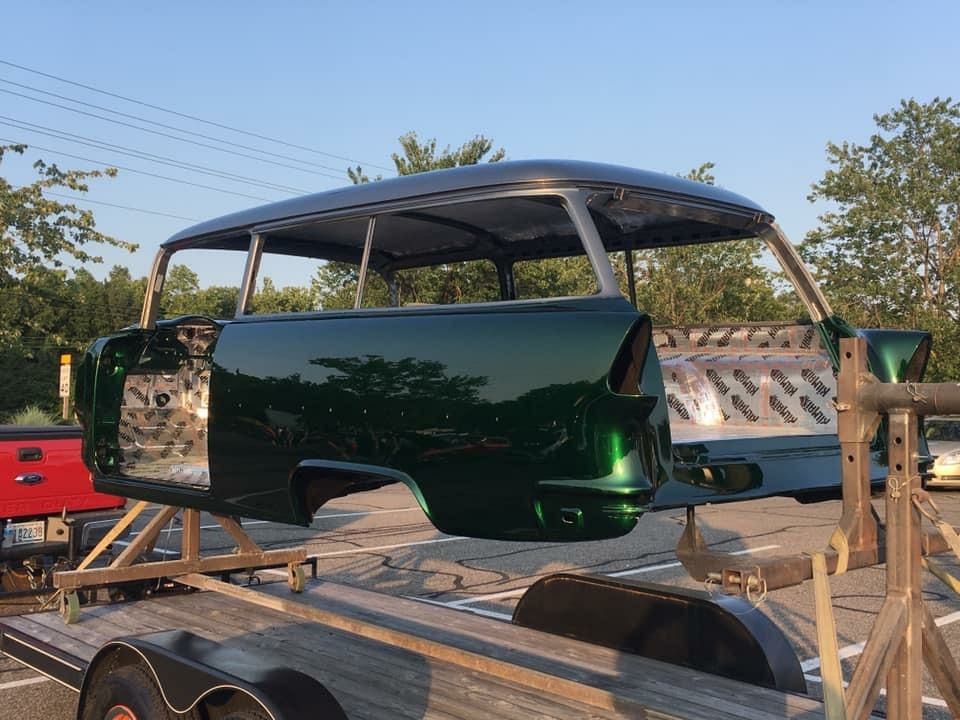 With that done, we can finish our spring cleaning in the shop and get this set back down on the frame..

I cant wait to see it come together, outstanding.

I would have been a nervous wreck towing that home! Looks amazing.

Beautiful!
Is this SPI Clear?

Thanks for the comments guys!


getawaycars said:
Beautiful!
Is this SPI Clear?
Click to expand...

Robert, I suppose you just don't have to sleep. I can't imagine any other way you'd have time to do such great documentation of these projects certainly after spending the time required to do this level of work on the cars. Incredible, truly impressive.


Well I think we're long overdue for a wagon update. Yes, it is back in the building....

And we should be setting the body back on the chassis this weekend. We've been buttoning up some last minute things on the frame before a body makes accessibility more of a challenge. The cable for the O2 sensor up to the EFI was about two feet too long, so we ordered another connector and shortened it up a bit.

In order to better hold things from bouncing around, a large Adel clamp is "massaged" to better fit the shape of the Bosch connector, and yet remain loose enough to remove the connector if need be for any future troubleshooting needs.. 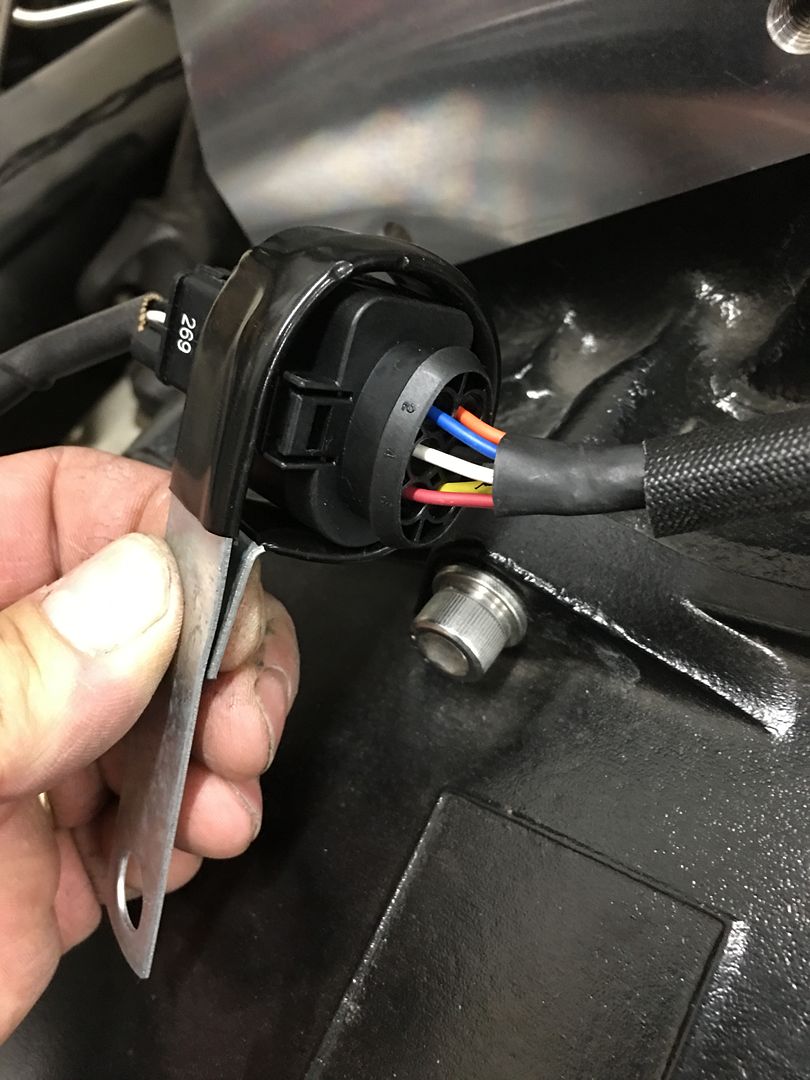 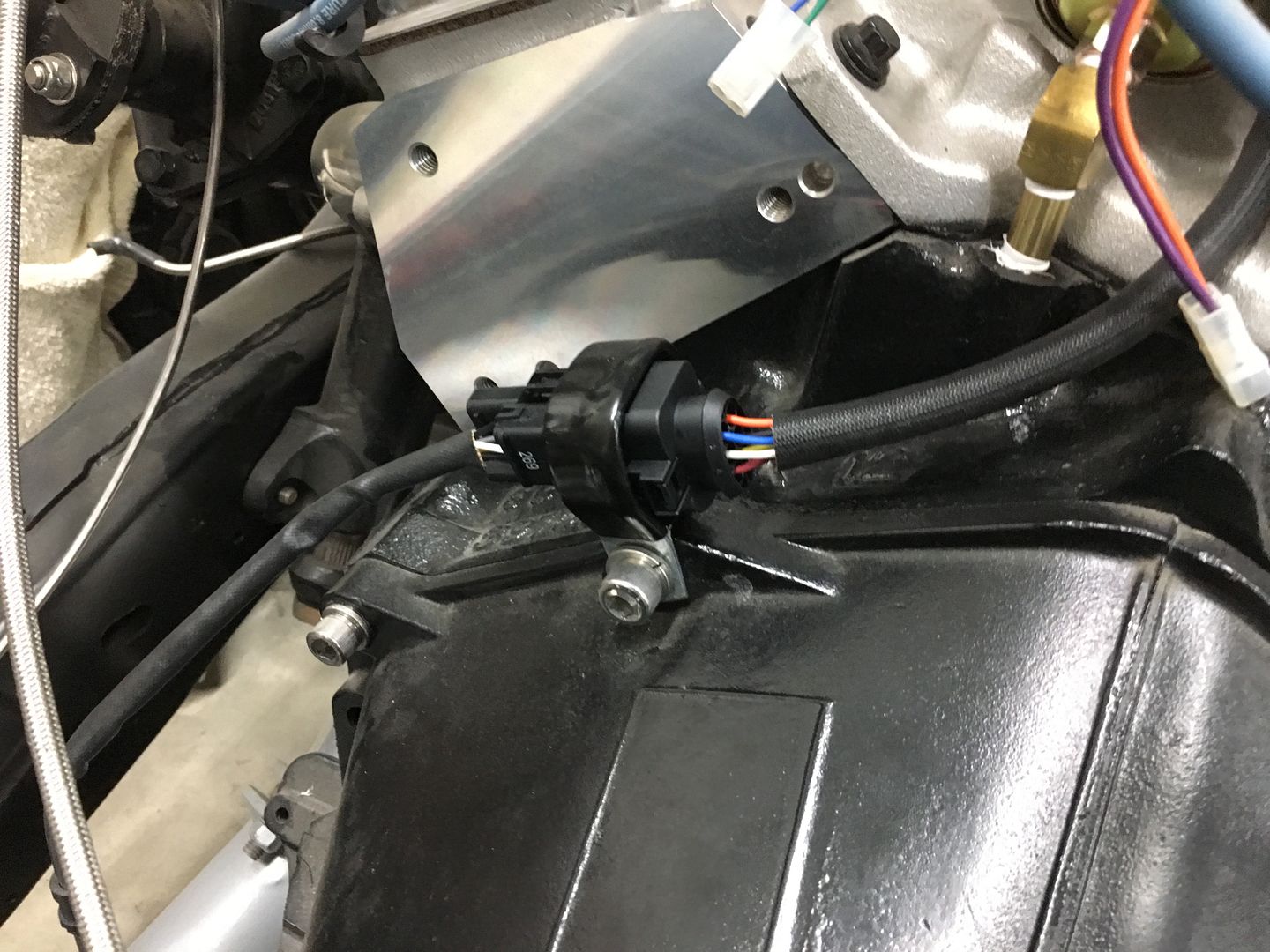 ….and here's our leftover.

Next, we had transmission cooling lines to run, which means straightening a coil of stainless 5/16 line.... 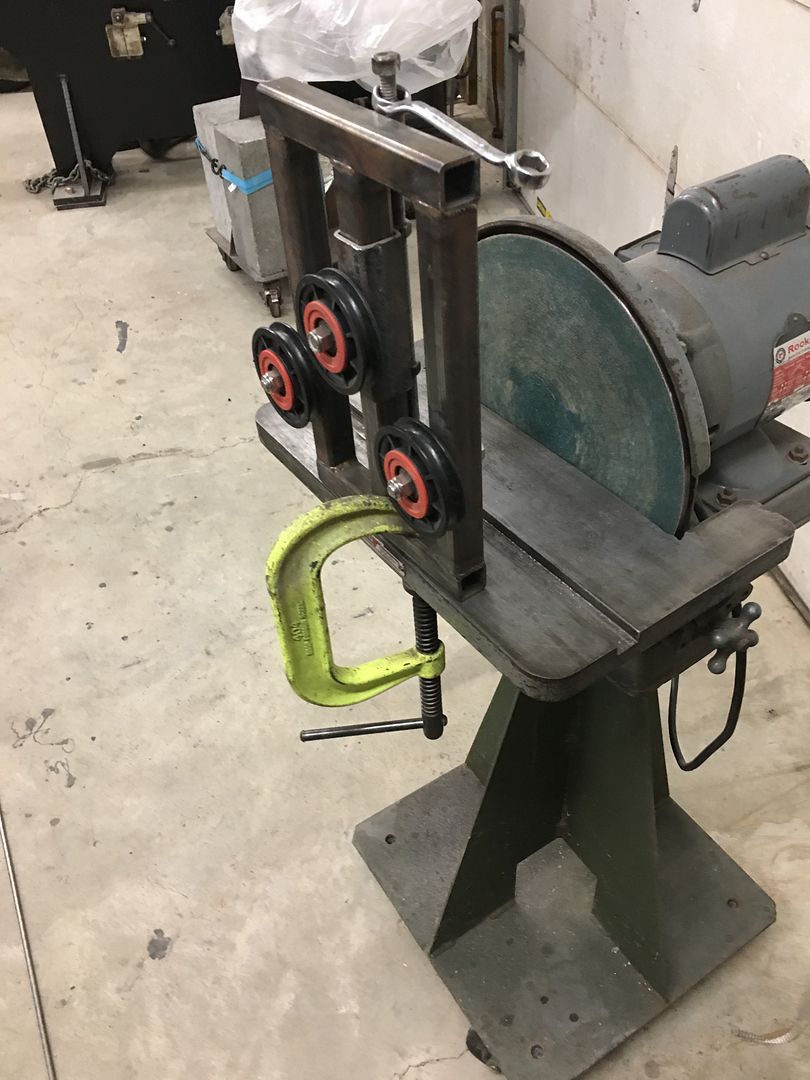 This should be straight enough....

We had to insure clearance around the inspection cover and starter, so those were temporarily installed...

We found these fancy stainless "cable ties" at McMaster, but even using a banding tool to tension it, the "tang" retention allows it to loosen slightly before the tang locks in.

Since I had recently picked up a pair of Pex crimpers at a pawn shop for cheap, we thought we'd give those Oetiker clamps a shot for keeping things snug.. Looks like this may work!

And then some other superfluous stuff, we got the second vent bracket welded up last night 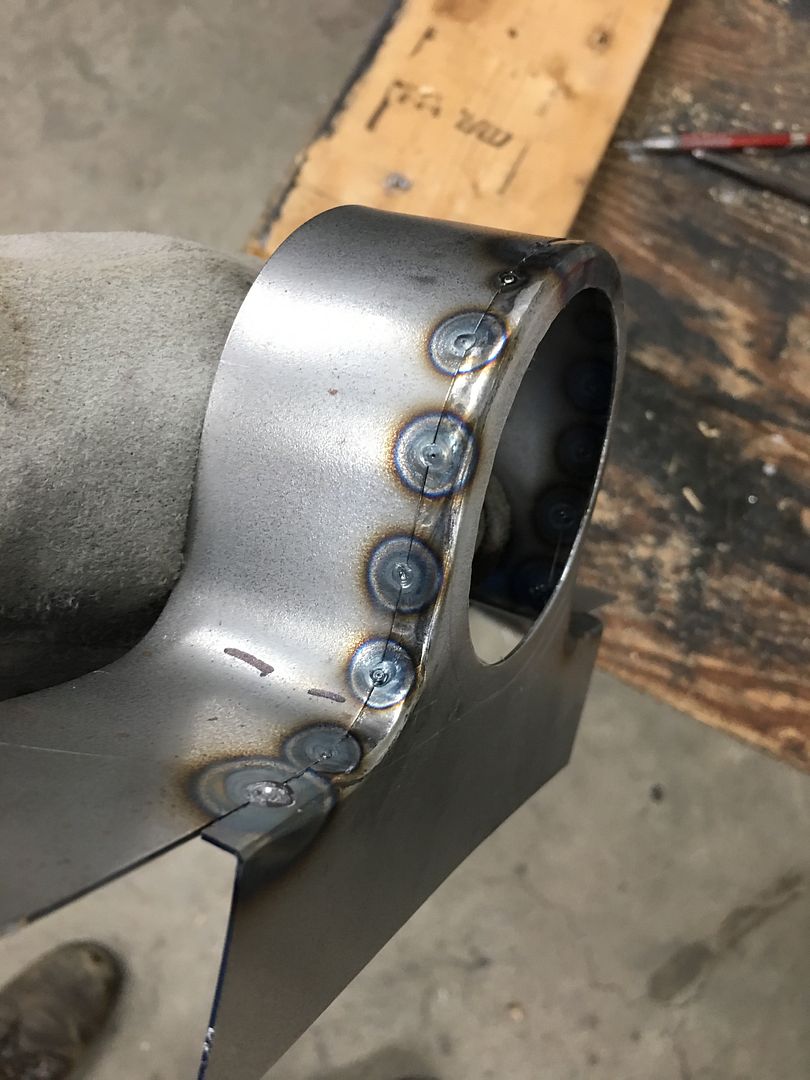 And even though it's off in the near distance, it's about time to repaint the tag so DMV can register it to the car (1955 only had one plate in MD)...
Thought I had some bus paint that was close, but looks a bit too light..

But playing with some mixing ratios online, I may be able to use some of my one shot lettering paint as a tint to get us much closer...

And since the rest of the bits are now being cut and buffed, we better get the body on the frame to make some room in the shop..

….and between all that, we made another set of window dividers, these going to Dallas for the restoration of a 57 wagon...