To be honest, I have never done the amount of testing that you are doing. The closest thing I've done is making a sprayout on a color that I already had a card on from months to years earlier. Usually, it is very close, but not exact. I am usually just looking for something blendable, though.
B

Here are some various cards done this week. You can see some are whiter than others. I think it's about time to try a single stage enamel or urethane. I'd hate to have it come back in a few years and I can't match something. Local jobber no longer mixes standox so that leaves chroma base as my other option for base/clear.
This might be very well be normal but I doubt it. 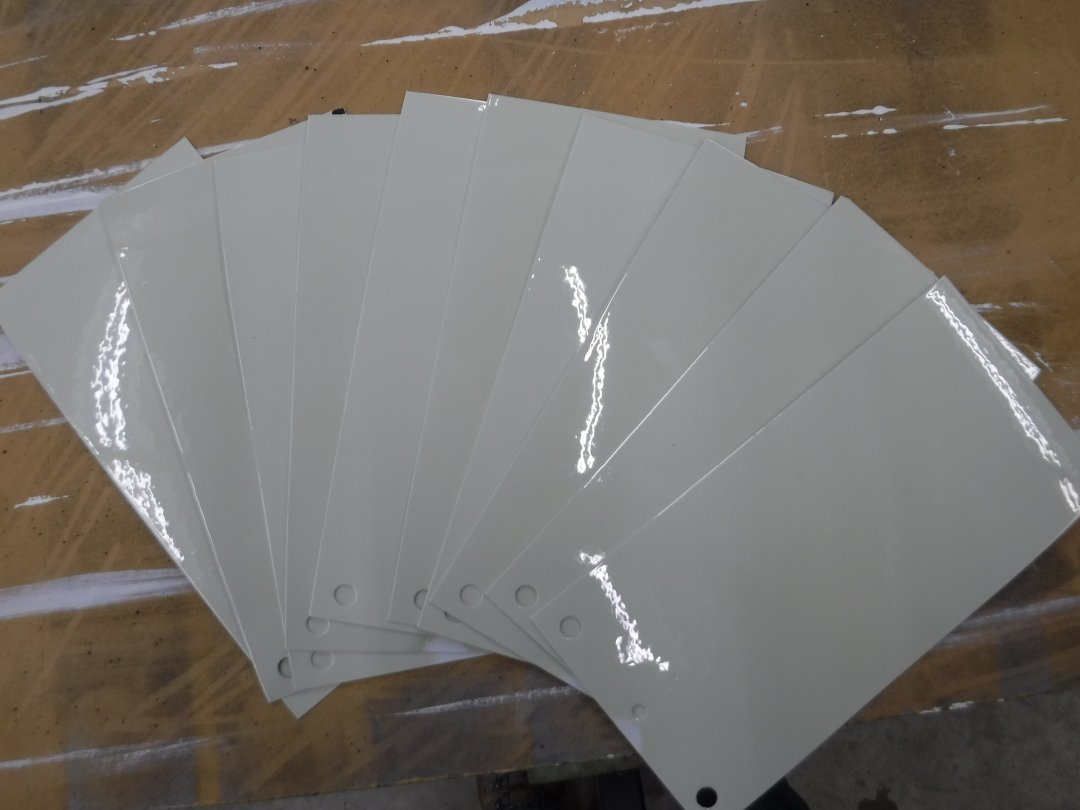 That's really weird. Would be enough to scare me off of DBC, especially given what they charge for it. Maybe one or more or the jobbers toners has gone bad, not sure, it's strange.
Y

Gotta be a 1953 GM majestic white color. The owner wouldn't accept anything else.

If your local jobber sells Axalta, they are very likely in a network of stores that can get you Standox or Spies Hecker even if they don't mix it.
O

Ive had white panels mismatch when I painted them all at the same time, lol
B

I finally pulled the plug on the DBC. Lost enough time and money trying to get it consistent.

Trying Debeers now. I'll let you know how it comes out.
B

I had a PPG guy tell me I was having the problems from the SPI 885 reducer. I ended up using the PPG DT885 for the job but It didn't magically fix the previous condition but by this time I had purchased the DT so I used it on the job.

I painted the body/trunk lid together and the next morning did the hood/4 fenders/doors. It all came out the same color. It's the color I wanted also so that is great. Once I get the power brake booster repaired I'm done with the job since the owner is putting the grille/bumpers on.

Thanks for the help.

Brad J. said:
I had a PPG guy tell me I was having the problems from the SPI 885 reducer.
Click to expand...

Oh, yeah, sure, that was it the whole time, that off-brand bathtub reducer!

I've got a lot of experience shooting DBC and this is not BS, DBC shoots noticeably better and lays down slicker with SPI reducer as opposed to DT. Not a small difference either. Noticed it almost immediately when I first sprayed DBC reduced with SPI. DBC has always laid down a little rough, or dry. When I switched that went away. Honestly felt like a different base, it was that good.
Higher quality and $25 a gallon cheaper, can't go wrong there.
S

That's an awesome Buick Brad! I'd love to see finished pics. Are you doing the complete restoration or just the paint?
B

Slofut said:
That's an awesome Buick Brad! I'd love to see finished pics. Are you doing the complete restoration or just the paint?
Click to expand...

I'm just doing a repaint, lizard skin the firewall, and some mechanical service. This car was done in the late 80's by my wife's grandfather. It held up great but the laquer top coat was cracked. Since I know the products he used I figured I could sand off the laquer and go over. I'd never do that for a car that is unknown. The paint cracks were through the DP40 epoxy primer so I had to strip it.

I took a picture of the fuel door to show the layers. The green is DP40, Yellow is K200 urethane, gray is Kondar laquer primer, and white is acrylic laquer paint. All PPG products. I don't know why he used Kondar over the others but he did that when he taught me how to do it in the mid 90's. I've never seen the DP40 crack before but we own two of his old cars that have the same laquer cracking and they might be from the DP40 also. I'll know someday when I get enough time to repaint our cars.

The car is a 53' Buick Skylark. First year and a one year bodystyle. They were built for the 50th Anniversary of GM and were paraded around the country with the new Corvette, Eldorado, and Olds Fiesta with the GM Futurliner. All considered "Sports Cars" at the time. I've driven several of these over the years and they were factory customized Roadmasters so a sports car they are not. Great riding though.